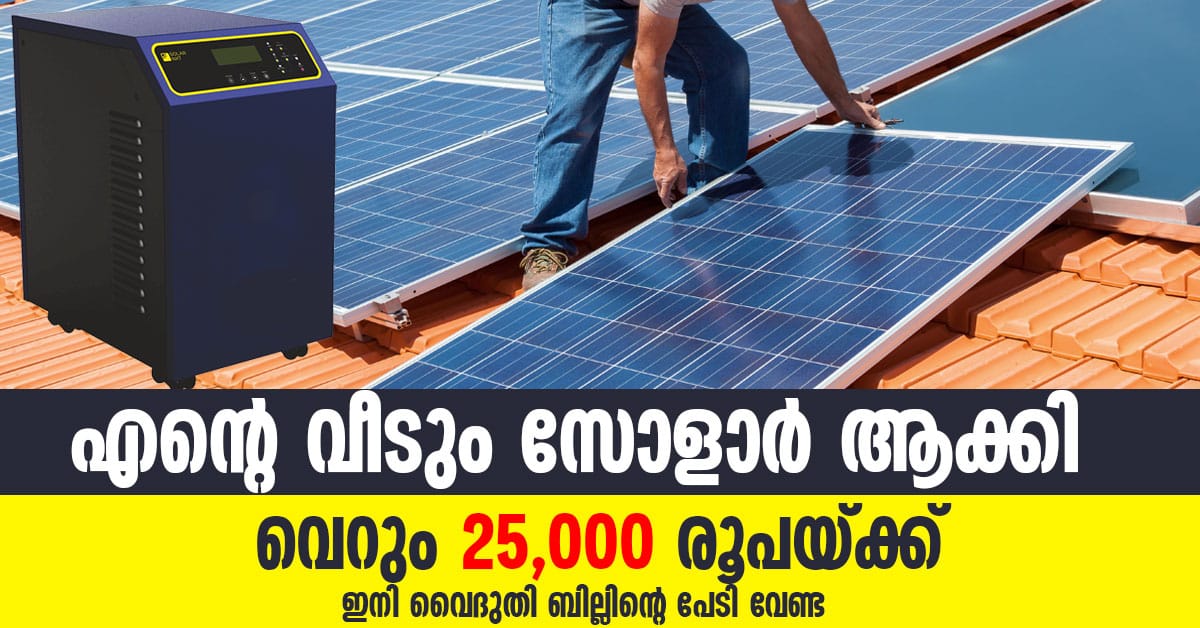 Now KSEB itself is offering opportunities to install solar panels through the Soura project. But the main drawback here is that panel-fitting contractors cannot be found. Another problem is that they are getting subsidies but it is facing delays. When installing solar panels, other doubts include how to fit them and whether they will receive the power they need. Here’s how to convert a converter currently in use to solar power.

How To Convert Your Existing Inverter Into Solar Inverter

Is it possible to convert an existing inverter to solar?

Yes. Now it is possible to convert your existing inverter to solar power. In addition, all the devices that work on the inverter will work on solar power.
They also work day and night in the same way. Using this method can also reduce the high current bill very easily.

The money you spend on this system can be repaid in just two or three years. That means the cost of converting the panel in 36 to 40 months can be saved from the current bill.

If you do not use an inverter, you will need to set up a backup system first. But instead of a standard inverter, a solar-powered inverter has to be fitted.

In addition, you can monitor the solar energy generated every hour and its usage using your phone. The company, panel that fits these monitors the activity closely. Therefore, they can know the problems before the householders know.

The standard converter is converted to solar using an intelligence converter. This helps in the accurate monitoring of electricity consumption in each household. The algorithm used in these works in a way that saves more energy during the day. Therefore, by the time the sun sets, the required energy will have reached the converter.

100% solar energy may be stored in the battery. So do not be afraid that the battery will not work properly at night. You can also avoid running out of battery at night. But all the devices work in the same way as normal electricity.

Using such an integrator will not affect future changes to the batteries. This means that if the current lithium-ion battery is replaced with a new one in the future, it can be upgraded and used via an OTP.

Integrator connects via a laptop so every change that occurs on the panel is closely monitored. The panels can be fitted according to the electricity usage of each house. It costs only Rs 25,000 to convert a normal converter to solar.

Those who want to fit the panel can contact Energy 24/7 in Kollam. They can install such converter systems anywhere in Kerala. Watch the video to know more.