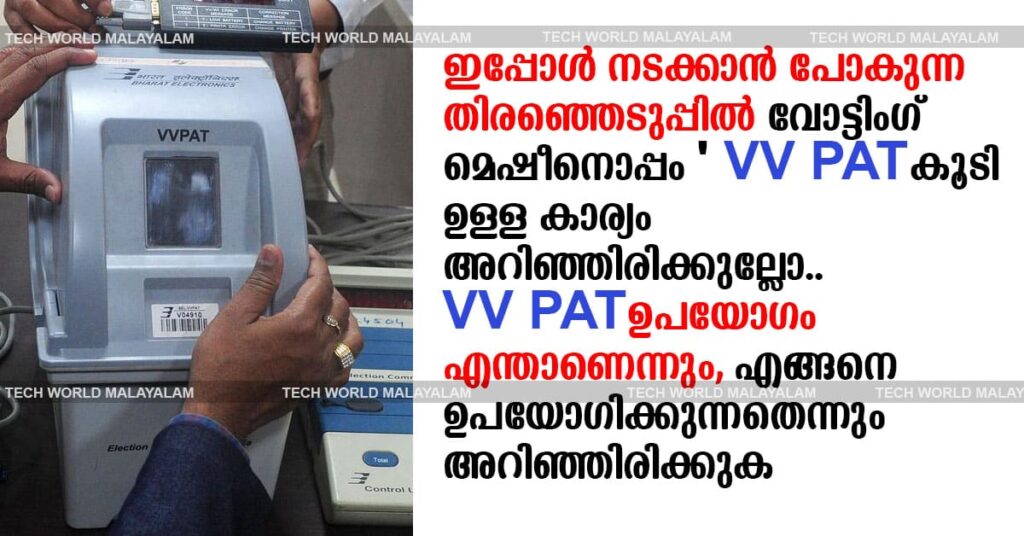 What is VVPAT? How does it work? Voter verifiable paper audit trail (VVPAT) Electoral process uses paper audit machines that can verify the voter.

The Vivarup Verified Paper Audit Trial is a special printer that can be attached with an electronic voting machine. When a voter votes, it will be printed on a paper slip on the release page. Check it out by the voter and make sure that his vote is correct. It will be given seven seconds.

Then the slip is cut off and the vippat will fall into the box that is joined to the machine. Let’s not slip home. Only the polling officers can open the slip box. If there is any dispute over the polls, you can count on the slips in the dispute.

In March, the Election Commission had announced that it would utilize the Visivat in all the upcoming elections. But the official announcement comes from the present

EVM is an electronic voting machine,
The mechanism for making a quick voter turn out in less human work. Instead of ballot paper, the electronic memory chip preserves voting information.
There is also a battery system for powering the power.
In 1998, it was the first to use the voting machines in India.

2, what are the main parts of EVM. How does EVM work?

The main parts of EVM are a control unit and a bulletproof unit.

Control Unit: known as Unit Control Unit, controlled by the Presiding Officer. If the VATING machine presses the button on the pressing unit of the control unit to ensure that it is eligible to vote the voter’s name and ID card, the voting machine is ready to receive one vote. Once the ballot is locked, the ballot unit is locked and the next is not pressing the presiding officer button It’s not possible to tweet.

Balling Unit: Voter votes are pressed by buttons in the balling unit.
The voter may vote for the candidate if he presses the button on the slip marked by the name and symbol of each candidate.

Voter Checkable Paper Audit Treble (VVPAT) or Verified Paper Record (VPR) is a method of giving voters feedback using voting system for voting. A Visible System is an independent checking system that allows voters to check if voting works correctly, to identify potential electoral fraud or faults, and to provide means for auditing collected electronic results. It contains the name of the party / individual candidate candidate (who voted for him) and the name. VVVP before leaving the room

Spread the love
Tags:
What is EVM?