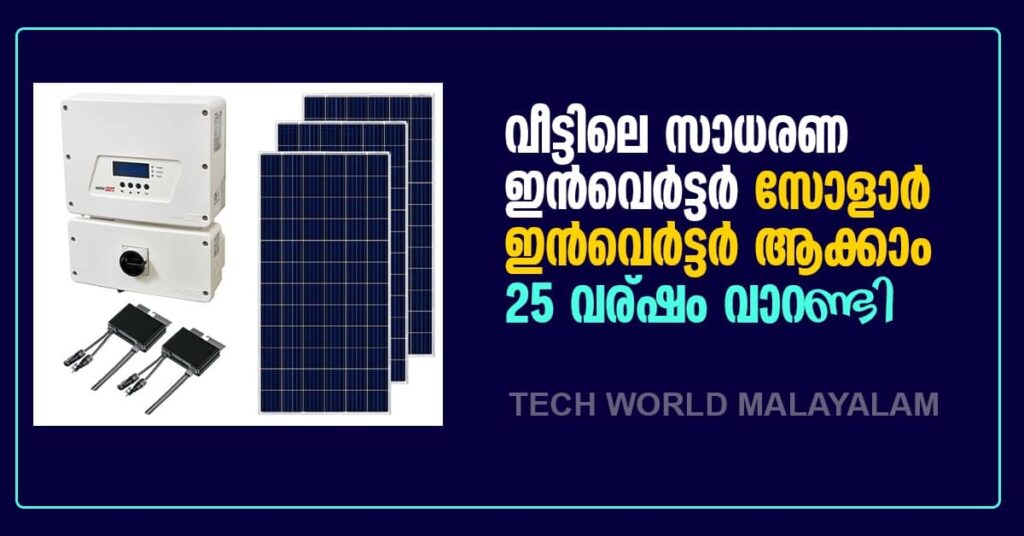 How to convert normal inverto to solar invertor : By converting the normal inverter into the solar hybrid inverter, one can connect solar panels to it and start using the solar energy available

If you want to convert a standard inverter to a solar inverter, the necessary components

Install solar conversion kits into normal inverter systems; Solar PV Modules and Solar Converter. Solar PV modules are mounted on a fixed slope at the top of the roof and are usually facing in the south direction of the space. The energy generated is brought to the solar converter near the inverter and the battery bank. When the sun’s rays fall on these solar panels, DC (electricity) is generated, which leads to batteries through the solar converter and charging the batteries.

Things to Keep in mind before buying an inverter

Before buying the inverter, how much capacity should you buy, the battery tubular enough, and the battery and inverter to be purchased by the same company? Want to buy a battery inverter or two? Is there any benefit in buying a sine wave inverter? Would a solar inverter be better? Doubts will thus be raised.

How long will the current go on average? Do they also have long power cuts or occasional short durations of power cuts? Before buying an inverter, there are a few basic things to know about how long your home appliances will run.
This will be different for each situation. Air conditioners, heaters, pump sets, and refrigerators that normally use more power cannot be used in inverters. This is not to say that there are no capable inverters that can be used but it is not cheaper than generators. So this is only meant to be about the average domestic use inverters.

Lighting loads like LEDs / LED bulbs, tube lights, two or three fans, a television and sometimes a computer. Listen to a monster T? True – the second you put the mix in the coconut mixer is a daily occurrence, so why not consider it a necessity? Yes, but only for certain terms. Let me tell you about it.

Let us first calculate the load. An LED bulb is 10 to 15 watts, 60 to 80 watts per fan, and a television LED is 80 watts depending on the screen size. Put it all together. That means you want to have a 3 watt LED bulb on your can and a 60 watt LED TV with two ceiling fans (75 watts each) when the current goes on. Total Power (3 × 10) +60+ (75 × 2) = 240 watts. Since all of these devices work on an 80% efficiency overall, a 20% power loss would have to be added to this. Then you get how VAD is Lod. I.e. 288 VA. This is the load you need. But there are some problems here too. The following devices use a little more power when they are turned on. This means that the LED TV is only 60 watts but in a few seconds it turns on the power from 120 to 150 watts. The variation in this starting load can be the case for many devices. So one more issue needs to be addressed. So we can calculate that the required inverter capacity is 500 VA. But since we don’t just add up, we also need to get the 500 VA inverter. All the good companies in the market generally start at 650 VA. Then the election becomes easier. You need to buy something above 650 VA. Did you forget the mixie mentioned earlier when the load count was computed? The standard mixi used in our homes is from 500 watts to 950 watts. The starting load of the mixer is twice as high as the current used. Therefore it is not advisable to run on a Mickey inverter. You might be thinking that the coconut for Avial could be crushed. Don’t worry we have to increase the capacity of the inverter. The 650 can be purchased for $ 850 or $ 950. There is little difference in price. All other loads must be off before using the mixer. And don’t try to run a 900 watt mixer like this. Come back to the inverter. Since there is no significant difference in the market price between the 650 VA and the 850-900 VA inverter, you can choose the larger one. You never know when you might have to use an extra piece of equipment for a while.

There are many different types of inverters. Square Wave Inverter, Quasi Square Wave Inverter, Sine Wave Inverter. This type is based on the behavior of the current supplied by the inverters when running on battery. The electricity we receive from the Electricity Board in our home is Pure Sine Wave. Initially, the inverters could not give a pure sine wave instead of a square wave. It was necessary to use expensive circuits to make a sine wave. Then the Pure Sign Wave was not necessary to run all the usual electric bulb and fan.

Even if you buy a regular inverter and charge controller separately, there is no significant difference in price. However, those who wish to connect solar panels can buy such inverters. In the sun, the battery will be charged from the solar panels without using current from the line. That way you can save the current bill and not have to sit in the dark for two days.

Now let’s get to the battery. When purchasing a battery, you need to be careful as the battery is more expensive than the inverter. Lead ink batteries are used for inverters. A battery will be of 12 volts. If your inverter is below 1KVA, a 12 volt battery is enough. Be aware of the Thumb Rule that all inverters with capacities greater than 1 KVA will need 24 volts or 2 batteries. Buy inverters with less than 1 KVA if this is a problem and if possible, limit the load. Battery Capacity Ampere – They refer to as 60 Ah, 80 Ah, 100 Ah, 130 Ah, 150 Ah, 180 Ah.

Do not use automotive batteries in inverters, even if these batteries are connected and the inverters will work even if they are used in automobiles and similar lead acid batteries. This is because there is a difference in the design according to the usage of both. Car batteries are designed to provide maximum current for a short period of time to run starter motors. Inverter batteries are capable of delivering long lasting current of approximately the same level. In this case, ready-to-use tubular batteries for inverters are preferred. There are several types of inverter batteries themselves.

General Flooded Acid Batteries (FLA) and Maintenance Free VRLA (Valve Regulated Lead Acid Batteries), which fall under the category of Sealed Lead Acid, are the main sub-categories. Of these, standard lead acid batteries are the cheapest. Occasionally it is necessary to check the amount of electrolyte and fill it with distilled water. Depending on the usage and the weather, it usually takes two to three months. These should be placed where there is good ventilation.

VRLA batteries can be expensive, but they can be purchased if they are affordable, with frequent watering, less gas emission, and no fear of falling and acid leaks. But remember that at the time of sale, the VCRA batteries will be less than the Acry price