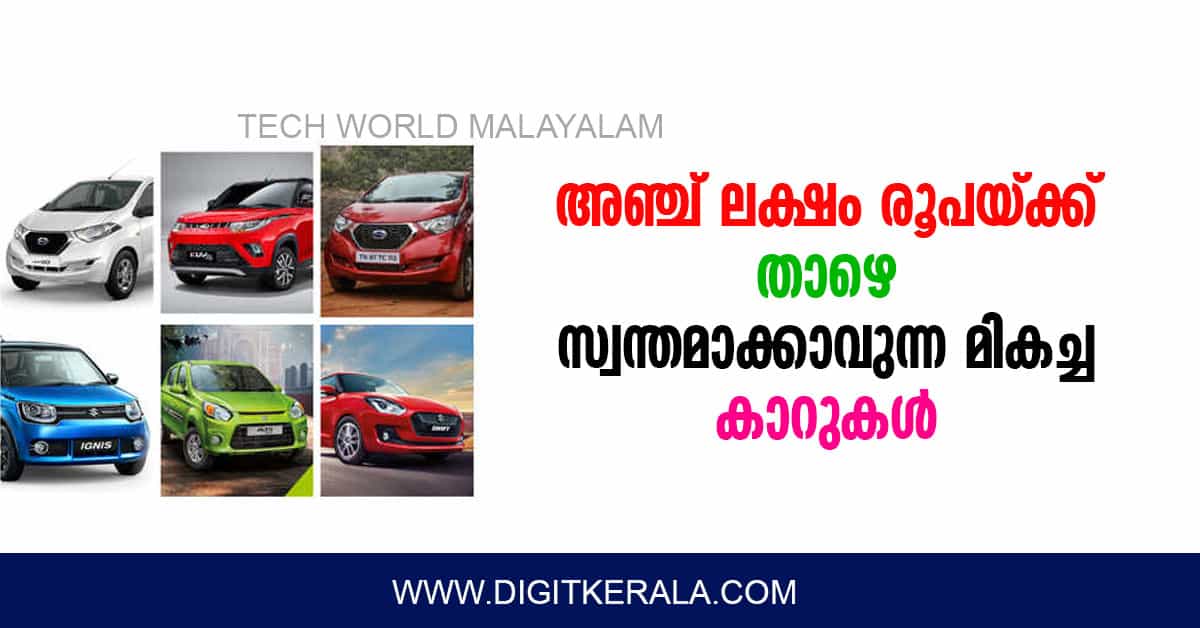 Best petrol cars under 5 lakhs in India : The under five-lakh price segment for cars in India is a hot one and over . The five most fuel efficient petrol cars with a price tag below Rs 5 lakh.Maruti, Tata, Renault and Hyundai have all launched low-budget cars.

Demand for small cars has been rising recently due to factors such as fuel efficiency and parking. For these reasons, even those who have big cars get smaller cars as a secondary car. Here are five cars that can be trusted and selected for less than .Most of the major brands in India offer these small cars. Maruti, Tata, Renault and Hyundai have all launched low-budget cars.

The Alto is the highest landing vehicle in India. Taking the step, the Alto dominated the 800 range. The popularity of the Alto is due to its affordability and affordability. These smaller ones guarantee greater fuel efficiency, lower cost and more convenience. The car is available in petrol engines only and is expected to be priced between Rs 2.66 lakh and Rs 4.14.5 lakh.

The Eon is the smallest car from the Korean automaker Hyundai. The Eon has been recognized with the Alto 800 and has gained the approval of motorists. The low price and excellent performance was the hallmark of the Eon. Launched in two engines, 814cc and 998cc, the Eon promises fuel efficiency of 18 to 20 km. The Ion Ex-showroom is priced between Rs 3.33 lakh and Rs 4.66 lakh.

Renault, the French automaker, recently became active in the Indian market. For Renault, however, the Duster has become a model. Quid is a model that Renault has unveiled to regular users. The Quid has been released in the form of a Duster in appearance. The Quid has been released in both engines and has a good mileage and good power. With ex-showroom prices ranging from Rs 2.67 lakh to Rs 4.64 lakh, the QID guarantees mileage of 24-25 km.

Datsun is a Japanese automaker owned by Nissan. Ready-Go is a great vehicle for the Indians and this company has been able to offer a minimal experience to Indian customers. Ready-Go is a baby in appearance but with a wide range of amenities inside. Available in 799 and 999cc engines, the car also comes with automatic manual gearboxes. With a fuel efficiency of 21-23kmph, this ready-to-go ex-showroom costs between Rs 2.5 lakh and Rs 4.05 lakh.

The K-10 is a small car that Maruti has released in the K-series engine. The car is also very popular in the automated model.The K10 is the hallmark of the K10 as it comes with lower prices and more power and fuel efficiency. This model is expected to offer mileage ranging from 22-24 kmph .

Encumbrance certificate in Kerala- How to apply online

how to apply ownership certificate in Kerala