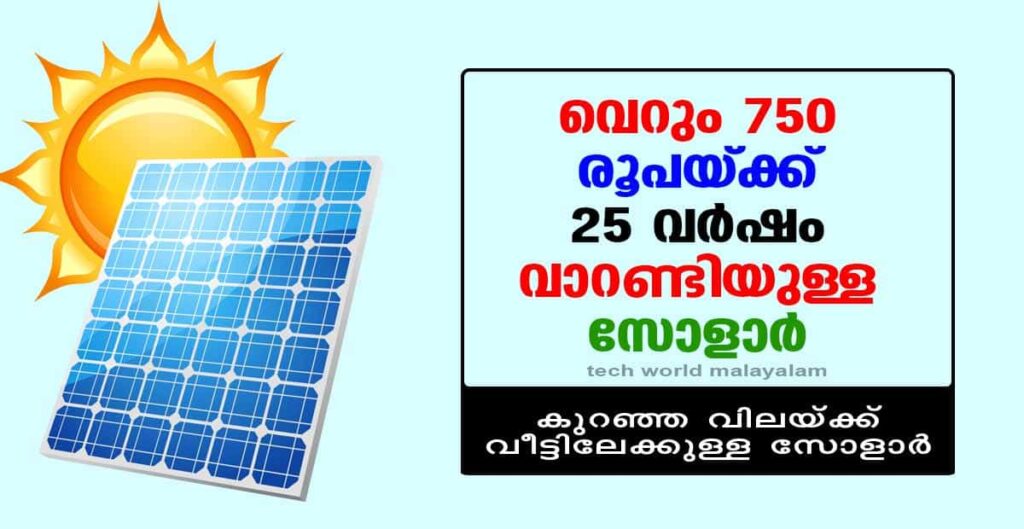 Loom Solar has released a 10 watt solar panel for mobile charging using sunlight. The panel is specifically designed to charge small batteries up to 7 Ah or 7000 mAh.10 Watt Solar Panel Unboxing And Overview In Malayalam video below.

Solar energy is completely free from the initial lapse. The panels should be placed where the direct sunlight is on the roof. The solar energy captured by the panels can be stored in the battery as a DC current and later used for home use through an inverter.

We should start thinking about the relevance of solar power in the knowledge that hydro power projects are a major environmental hazard and that such projects are difficult in Kerala.Solar energy can range from small houses to large establishments. Solar energy is easily available, but it can be costly to collect and use.

The cost of space and the cost of solar energy is hampered. Only a small fraction of the amount of solar energy available on Earth can be converted into electricity.By installing solar panels on the terrace of the house, a portion of the electricity needed for the home can be generated on its own. It is estimated that a kilowatt solar panel could be installed on a 100 sq m terrace.

The days passed when only one fan and two lights were powered by solar energy. Motor, water heater and AC are running on solar power. Fully solar powered homes can be viewed today without even KSEB connection. Connecting to solar energy requires equipment that runs most of the time. This requires finding the connected load. The starting current and running current of each device are two levels. The starting current is two to three times larger than the running current. Both of these must be taken into account to determine the connected load.

There are two types of solar inverters – on-grid and off-grid. There is also a system to provide the government with electricity after our need. This is possible through an on-grid inverter system. An application fee of Rs 1,000 will be allowed by KSEB officials to come and inspect them. The equivalent amount of electricity supplied to the government will be deducted from the electricity bill. The advantage of this system is that the cost of the battery is a profit. If there is no current in the KSEB line, it is a disadvantage to not get current in the home.

Electric Bill Calculator App in Kerala : How to save on electricity bill