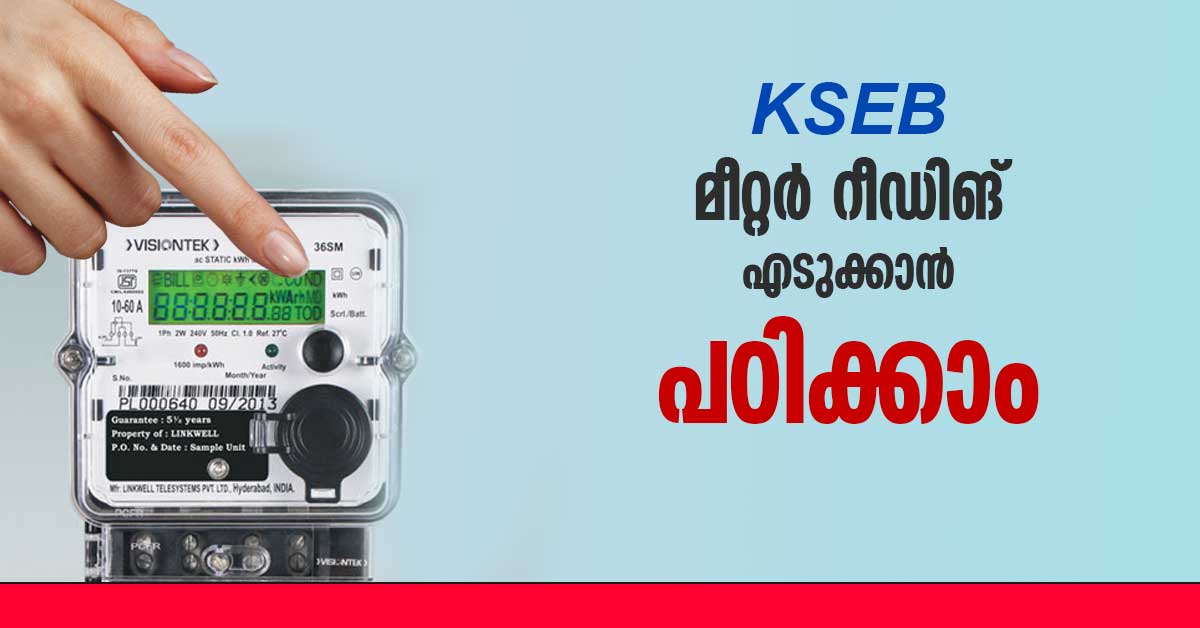 Many of us do not know how to calculate the amount of KSEB bill in the house to take reading every two months. Also, many of us would be interested to know what are the readings given in a KSEB meter and how to find the monthly power consumption using it. So here are the things you need to know about KSEB meter readings. A KSEB meter is an integrated instrument. In other words, an integrated instrument is an meter that shows how much energy has been used from the meter to the present day. There are many types of energy meters available in the market but in the past mainly disk shaped energy meters were used. That is, the disk rotates according to its power consumption. So current month’s energy consumption could be found if you subtract from the unit you used now last month.

Most homes now use digital energy meters. That is, the power consumption is shown according to the blinking of the light.

After all of this came meters that showed readings on digital meters. The LCD display is used for this purpose. The reading can be understood very quickly. At present KSEB provides digital TOD meters in most households. Its full name is Time of Day Meter. In other words, they work in such a way that they take a reading of it in three zones for 24 hours. These have been used since old times but mainly in large factories and so on. This is because the amount of electricity used by the industry varies from time to time, and such meters were used to calculate accordingly. But later it was also used for domestic purposes. As mentioned earlier, the first zone divided into 3times zones is from 6 am to 6 pm. It can be seen as T1 or C1 in meters. The second Time On Zone 2 is from 6pm to 10pm. The third zone, Zone 3, is from 10 pm to 6 am. The meter readings from each zone to the next month can be found by waiting until the meter initial condition is reached or by using the push button switch below the meter.

On the initial stage, all the displays will null This is where the reading begins. It will then shows b-good on the display, indicating that the battery is in good condition. This will be followed by the current date and time. After that you can see the current voltage.PF may be 0.99 which is very good if you get 1. It will then show you the power consumption you are currently using. Indicated in kilovolts.20 indicates 200 kV. This is the number of kilowolts of electricity used in a day. To find out the amount of electricity you used this month, you need to check the meter reading for the previous month and subtract it from the current Power Consumption. That is, the number that shows kw h on your meter shows your current Total Power Consumption. Power consumption can be seen as t1, t2 and t3 in 3 time zones as mentioned above. It is available separately at the tod meter. In E3 zones it can be found by increasing the power consumption and total consumption. This way you get KSEB bill reading from your T OD meter.